Warning: Undefined property: wpdb::$dmtable in /home/bohemica/public_html/techczech.net/wp-includes/class-wpdb.php on line 750
 Sunsets, horizons and the language/mind/culture distinction – Metaphor Hacker Skip to the content

For some reason, many accomplished people, when they are done accomplishing what they’ve set out to accomplish, turn their minds to questions like:

I’d like to offer a small metaphor hack for solving or rather dissolving these questions. The problem is that all three concepts: culture, mind and language are just useful heuristics for talking about aspects of our being. So when I see somebody speaking in a way I don’t understand, I can talk about their language. Or others behave in ways I don’t like, so I talk about their culture. Then, there’s stuff going on in my head that’s kind of like language, but not really, so I call that sort of stuff mind. But these words are just useful heuristics not discrete realities. Old Czechs used the same word for language and nation. English often uses the word ‘see’ for ‘understand’. What does it mean? Not that much.

Let’s compare it with the idea of the setting sun. I see the Sun disappearing behind the horizon and I can make some useful generalizations about it. Organize my directions (East/West), plant plants to grow better, orient how my dwelling is positioned, etc. And my description of this phenomenon as ‘the sun is setting behind the horizon’ is perfectly adequate. But then I might start asking questions like ‘what does the Sun do when it’s behind the horizon?’ Does it turn itself off and travel under the earth to rise again in the East the next morning? Or does it die and a new one rises again the next day? Those are all very bad questions because I accepted my local heuristic as describing a reality. It would be even worse if I tried to go and see the edge or the horizon. I’d be like the two fools who agreed that they would follow the railway tracks all the way to the point they meet. They keep going until one of them turns around and says ‘dude, we already passed it’.

So to ask questions about how language influences thought and culture influences language is the same as trying to go see the horizon. Language, culture and mind are just ways of describing things for particular purposes and when we start using them outside those purposes, we get ourselves in a muddle. 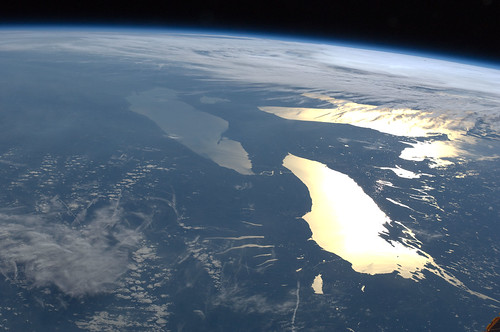